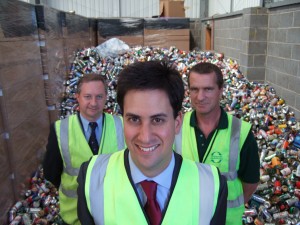 Maybe it’s too little too late or maybe it will end up being as useful as Monty Python’s Ministry of Silly Walks, but Prime Minister Gordon Brown’s reshuffle at the end of last week saw the creation of a new Department for Energy and Climate Change.

The minister in charge of the new department is Ed Miliband MP, aged 12¾, who said:

The news was welcomed by Greenpeace, which said the government has “dithered” on climate change for the last decade. Greenpeace’s executive director John Sauven said:

“Hopefully Ed Miliband will champion efforts to boost renewable energy end energy efficiency, as part of a plan to create the green collar jobs that Britain has so far lost to our European neighbours. The first test of his credibility will be whether he stops the UK’s first new coal fired power station in over thirty years at Kingsnorth in Kent.”

The new climate change department was also welcomed by Tom Delay, CEO of the Carbon Trust, who said:

“We have consistently argued that business and government must put climate change at the heart of their decision making. The creation of a new department with a specific focus on climate change is a welcome development and makes perfect sense. The department will have a critical role to ensure that the UK takes full advantage of the commercial opportunities that a low carbon world will bring.”