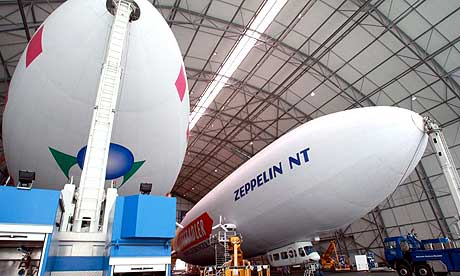 This morning Greenbang shall mostly be looking at… the owners of digger companies. Well one actually, Caterpillar.

It seems its parent company has launched a new way to cross the Atlantic, very slowly. If you’re wondering what the parent company is called – does the name Count Ferdinand von Zeppelin mean anything to you?

A trifling 91 years after the death of the Count died and about 70 years after the Hindenburg disaster the airship is back. The Zeppelin NT is set to be tested by flying around Germany, come to London and then set off on its voyage to San Francisco. At 125mph the 5371 miles should only mean 43 hours watching the same three films seven times.

Built using the Count’s endowment fund the Zeppelin is being billed as an eco friendly method of travel but Greenbang isn’t holding her breath for it to take off*. She’d love it to be used as an alternative to heading down the M4 to London but sadly doesn’t have the £3 million to keep it in helium. Instead, she’ll be putting in a call to Rory Laing, of the BBC’s Apprentice fame, who’s going to be charging a mere £150 a ride.

* Sorry for the pun.