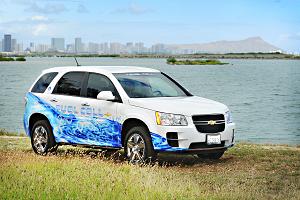 As a group of islands far from the mainland US, the state of Hawaii probably has more reasons than most to worry about a sustainable future. That’s why it’s exploring a variety of ways to reduce its dependence on imported fuel, which currently provides about 90 per cent of its energy needs.

In 2008, for example, the state teamed up with the US Department of Energy to launch the Hawaii Clean Energy Initiative, which aims to obtain 70 per cent of Hawaii’s energy from clean sources by 2030. The state is also working with Better Place to build an electric-car infrastructure that’s ready to support widespread plug-in vehicle adoption by 2012.

And now General Motors has turned its eyes to the Aloha State with a plan to develop a transportation system powered by hydrogen.

GM says there’s plenty of hydrogen available on the island of Oahu, thanks to the state’s major gas energy provider, The Gas Company (TGC). Under a new partnership between the two firms, TGC will separate hydrogen from its gas stream at several locations and send it to local fueling stations for fuel-cell-powered cars.

“This is the type of enabler that a hydrogen transportation infrastructure needs because it addresses both the source of the hydrogen and a feasible way to deliver it for fuel cell vehicle use,” said Charles Freese, executive director of GM Global Fuel Cell Activities. “The Hawaii infrastructure could eventually support tens of thousands of fuel cell vehicles.”

TGC, which operates 1,000 miles of utility pipelines, currently produces both hydrogen and synthetic natural gas, with a gas stream that’s already more than 5 per cent hydrogen. The company plans to use a proprietary separation process to pull out that hydrogen for use as fuel.

“We have been delivering as much as 12 percent hydrogen made from renewable sources to our gas customers over the last two to three years and expect we can deliver even greater quantities of hydrogen as demand increases,” said Jeffrey Kissel, president and CEO of TGC. “By delivering hydrogen through our existing infrastructure as vehicle fuel wherever we have gas, The Gas Company expands its key role of supporting Hawaii’s clean energy future.”

According to GM, hydrogen fuel could be available at a price similar to standard petrol, or even less.

The automaker has spent more than $1.5 billion on fuel-cell research over the past 15 years, and is developing a system that could be ready for market by 2015. It’s already demonstrated fuel-cell vehicles in tests as part of its Project Driveway market research programme.