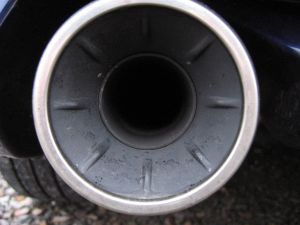 Researchers must be a lot like milk: if you leave them alone for long enough, all sorts of crazy stuff develops. Although in milk’s case, most of it would give you severe digestive wrongness, scientists’ work can often make you feel better about things.

The prototype works, powered by raw science, by taking all the heat wasted through the exhaust, recapturing it, turning it back into electricity and powering all your in-car gadgets, like your GPS or your in-car DVD player. (You don’t have an in-car DVD player? Greenbang neither. But she doesn’t have a car either.)

Here’s how it works, explained by AP:

The thermoelectric generator works when one side of its metallic material is heated, and excited electrons move to the cold side. The movement creates a current, which electrodes collect and convert to electricity.

According to a GM researcher by the name of Jihui Yang, the boffins have come up with a metal device for your exhaust pipe that can improve fuel efficiency by five percent.

Said Yang, who may not have been watching Anchorman recently:

The take-home message here is: It’s a big deal.”

The device will be tested out on a GM motor next year.