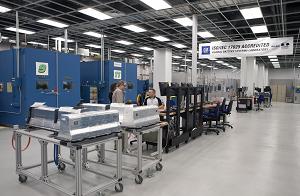 With an eye toward speeding development of the electric car market, the US automaker General Motors says it plans to spend $8 million to double the size of its advanced automotive battery lab.

The project, which will add 30,000 square feet to the company’s existing 33,000-square-foot Global Battery Systems Lab, is aimed at improving on-site testing of current and new battery cell technologies, as well as battery modules and packs. Set for completion this summer, the expansion begins this month.

Itself barely one year old, GM’s Global Battery Systems lab opened in January of 2009 and became fully operational only last May. It’s used by the firm’s growing team of more than 1,000 engineers working on advanced batteries and electrically driven vehicles.

The latest expansion will add capability in six areas:

The Global Battery Systems Lab equipment and test automation systems are being integrated with GM’s global network of battery labs, including facilities in Mainz Kastel, Germany, and Shanghai, China.

While focused on developing more environmentally responsible transport technologies, the lab itself also features many green building elements, including a centre hallway lit with high-efficiency LED lighting and a floor made from recycled tires. Approximately 90 per cent of the electricity used for battery testing can be returned to the local energy grid for use by homeowners and businesses.