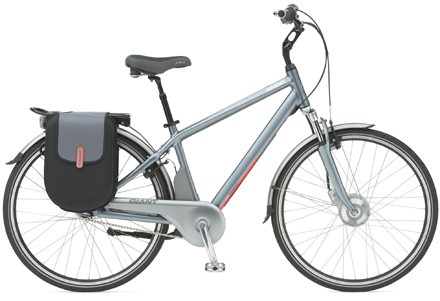 Since the age of five, when Greenbang walked downstairs to discover Santa had left a Raleigh Striker, she has loved her bikes.  Within the last week she has bought a brand new road bike and is already in the process of naming her.  Sadly, the new bike is a replacement from her stolen Giant road bike which she was very attached to.

Greenbang has been talking to another self confessed bike nut, Craig Brophy who runs the Sweat n Gears blog.  Apparently, the self proclaimed ‘world’s biggest quality bike company’, Giant, will be launching a range of electric cycles this Autumn.

Whilst this in itself is nothing new, Greenbang and Sweat n Gears both think the technology might be unique.  According to the press release:

Giant’s engineers have designed a machine which integrates a state-of-the-art power system harmoniously with your pedaling power to provide a seamless output of energy.

What this, very marketing, phrase is trying to say is, when you pedal the batteries recharge and lithium ion technology has been used for the batteries.

This should hopefully solve two problems generally associated with electric bikes.  They’re very heavy and they have very little range.  Giant claim the batteries will give 70 miles in economy mode and it only takes four hours to recharge.

Sadly, it won’t sort the other problem, price.  Whilst people with a love of road bikes will happily spend thousands to gain a one second per mile advantage, people that buy electric bikes probably won’t.  No price is listed on the press release but Sweat n Gears has given a US price of $2,000 and expects UK prices to be higher still.