Get your “global-warming” T-shirts here 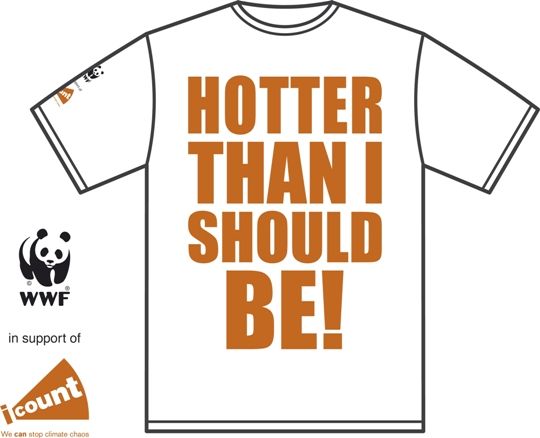 The WWF (World Wildlife Fund not the wresting people) have launched some new T-shirts to bring awareness to global warming.

You could buy one, or recycle an old one to save the carbon but keep the thought there 😉 Depends on what your statement is…

“Only 1000 t-shirts have been produced and all are available exclusively from www.wwf.org.uk/climate. For sale in both men’s and women’s sizes, every t-shirt is made entirely from natural fibres – 70% bamboo, 30% cotton and using non-toxic ink. Fans already include Alexa Chung, Lily Allen, Kate Nash, Dermot O’Leary and Steve Jones.

Recent National Statistics worryingly show that almost a fifth of the UK adult population believe that climate change is beyond control, and that it is too late to do anything about it*. WWF want to make clear that it’s not too late…but we need to act now!

To raise public awareness and encourage this much needed action to take place, WWF have launched a strictly limited edition line of slogan tees. Inspired by the iconic protest t-shirts of Katherine Hamnett from way back when, and the latest wave of House of Holland Nu Rave fashion groupie tees, the t-shirts are a must-have for any self-respecting fashion lover who wants to make a creditable statement.”