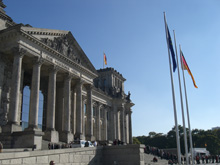 Greenbang is a big fan of the Germans – a nation that has a love of unfeasibly large two pint glasses of beer, is rather partial to a bit of football and knows that their meat should come in large portions with some bread involved in there somewhere.

Apparently, according to the paper, the Reichstag runs on 40 percent renewable energy at the moment, using biofuels, with the remainder coming from coal and nuclear.

Soon, the building will move to renewable sources using wind, water and solar for the entirety of its energy demands after a parliamentary subcomittee started the hunt for a supplier. The lucky winner will be found in the summer, the Guardian says.