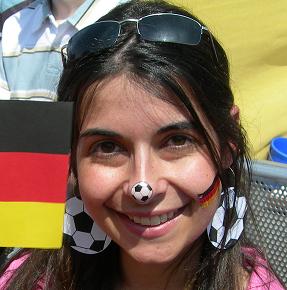 Greenbang is supporting at next year European Championship football tournament. This is because the team, as much use as a chocolate teapot, did not qualify, and and the aren’t European. No, seriously, it’s true, check here.

Happily , the land that brought us Lederhosen, Bratwurst and the Volkswagen Beetle, is also furnishing the world with clean energy. At least that’s the plan.

Einfach klasse!!! This is excellent news, Greenbang hears you cry.

It started earlier this month when EON said it would invest six billion euros in ‘green’ sources by the end of the decade. RWE has come back with a pledge of one billion euros every year, starting in January.

Here’s the World Business Council for Sustainable Development with the story:

Both groups, along with German power companies Vattenfall and EnBW, have given the priority to wind turbines, ahead of solar energy.

But the quartet, which produces 80 percent of Germany’s electricity, are also looking into other sources, including hydraulic energy, biomass, geothermal and hydropower, which draws energy from waves or tides.

“EON and especially RWE are not pioneers in renewable energy,” noted Reiner Haier, an analyst at the regional bank LBBW.

“They want to catch up, and it will be a tight race.”