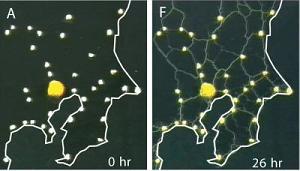 Which came first: the Japanese rail system or the slime mould?

It’s not as ridiculous a question as you might think. In fact, a team of Japanese and British researchers have found that the lowly Physarum polycephalum — described as a “gelatinous fungus-like mould” (yum) — can create a complex and efficient network that mimics the structure of the railway lines that lead out in all directions from Tokyo.

This is no odd and useless, though fascinating, discovery either. By developing a formula that describes how the slime mould builds its fungal freeway, scientists could provide insights into how to build more efficient and less expensive networks for computing and mobile communications.

Here’s how the research team uncovered the mould’s amazing road-building capabilities: starting with a wet surface for growing Physarum, they placed a small amount of the mould at a spot that corresponded with the location of Tokyo. (How the idea for this experiment arose in the first place has to make for a strange story in and of itself, we think.) They then put a few oat flakes — a favourite food of mould, apparently — at various spots corresponding with the locations of other big cities in Japan, then waited for the mould to find a way to reach its dinner.

Lo and behold, the mould started spreading out in an organised way, colonising each spot of oat flakes it came upon, then branching out to other spots to eventually create a network that resembled Tokyo’s train network in efficiency.

“Some organisms grow in the form of an interconnected network as part of their normal foraging strategy to discover and exploit new resources,” writes researcher Atsushi Tero from Hokkaido University. This particular type of mould, he went on to say, “”can find the shortest path through a maze or connect different arrays of food sources in an efficient manner with low total length yet short average minimum distance between pairs of food sources, with a high degree of fault tolerance to accidental disconnection.”

In other words, that’s one savvy mould.

Putting the mould’s behaviour into a formula humans can reproduce could improve a variety of our network technologies, according to Wolfgang Marwan of Otto von Guericke University.

“The model captures the basic dynamics of network adaptability through interaction of local rules, and produces networks with properties comparable to or better than those of real-world infrastructure networks … ,” Marwan writes in an article accompanying the new study. The work of Tero and colleagues provides a fascinating and convincing example that biologically inspired pure mathematical models can lead to completely new, highly efficient algorithms able to provide technical systems with essential features of living systems, for applications in such areas as computer science.”