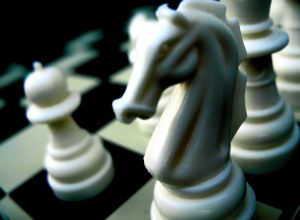 How could game theory help build a cleaner, more reliable and cheaper energy future? A group of computer scientists in the UK have envisioned a system that could get us there.

Today’s energy optimists envision a day when homes will all connected to a smart grid that manages electricity for maximum efficiency and minimum cost, and a lot of our power comes from clean, renewable sources like wind and sun. At the household level, people will also help generate some of their own energy through small turbines or rooftop solar panels, and store some of their own energy using the batteries in plug-in cars.

It’s a brilliant vision, but one that poses more than a few challenges. For example, while it makes sense in theory that an individual would want to charge her electric car at off-peak times when energy costs are lowest … if everyone made that same decision, the result would be a peak in demand.

On the other hand, if people all started using their plug-in-vehicle batteries as a source of electricity during times of peak demand, the result could be that grid-based electricity prices drop to the point where it would be cheaper to draw energy off the grid instead of from the car.

A conundrum, for sure.

Alex Rogers and Nick Jennings, a pair of researchers at the University of Southampton, say they’ve found a solution in something they call “agent-based micro-storage management for the smart grid.” In a nutshell, it’s a computerised system that lets individuals adjust their energy use to match real-time market conditions to optimise both their own electricity consumption and electrical loads on the grid.

The system — developed by Krishnen Vytelingum, Thomas Voice and Sarvapali Ramchurn — relies on game theory to reach what’s called Nash equilibrium across the energy infrastructure. Nash equilibrium is reached when many individuals make the best personal decisions they can while also taking into account the decisions made by everyone else.

According to Dr Rogers, who earlier this year launched an iPhone application, named GridCarbon, to measure the carbon intensity of the UK grid, this system will make it possible to install smart software into electricity meters. This will mean that the agents will be able to optimise the usage and storage profile of the dwelling and learn the best storage profile given market prices at any particular time.

“This approach focuses on the system dynamics where all agents in the system are given the freedom to buy electricity whenever they see fit and, building on this, they can then learn the best storage profile in a market place where prices keep changing,” Rogers said. “Another advantage is that if most homes in the system start using storage and manage to reduce peak demand, the overall cost of generating electricity is reduced.”

In the UK, such a smart system could work with just 38 per cent of households having their own on-site energy storage device (such as a plug-in-car battery), the researchers concluded. If each of those homes had a storage device with a capacity of 4 kilowatt-hours, residents could see a 13 per cent decrease in their electricity bills, they added.