G24i gets own wind turbine 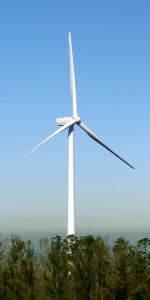 Greenbang is a fan of G24i – a Cardiff-based eco-innovation company. And normally, we wouldn’t run a story on a company getting its own turbine, but these guys are a bit special.

They’ve just been granted permission to build their own wind turbine. Once erected, they reckon it will generate enough green electricity to power G24i’s 187,000 sqaure ft site and possibly a significant number of surrounding homes and businesses.

Eliot Abel, G24i’s Sustainability Programmes Manager, comments: “We have worked incredibly hard to become a 100% ‘green’ factory and are delighted to have now received full permission to realise this dream.  We have the backing of the local Government and environmental groups.”

“G24i has also been in talks with Cardiff City Council and Techniquest about developing an environmental learning centre for students and the general public at our site.  The centre would explore all forms of renewable energy and their role in helping to address climate change and the wind turbine would certainly be a central feature.”

Robert Hertzberg, Chairman at G24i, adds:  “This is a real coup for Wales and the embodiment of a new model for Government and the private sector working together to tackle the enormous challenge of climate change.  I hope that we will inspire other businesses to take positive steps in tandem with the public sector to embrace tomorrow’s renewable energy solutions.

“We are seeing a global revolution in attitudes towards energy and the policy-makers are at the heart of it.  Business must work with these groups to effect real change”

The company became the first in the world to produce commercial-grade Dye-Sensitised Thin Film cells in October, marking the commercialisation of over 18 years of research and development.