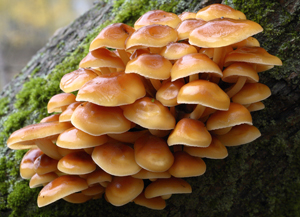 Greenbang is tearing down pictures of her loved ones from around her desk and replacing them with snaps of fungus. When you line up the achievements of friends and family next to those of mushrooms, there’s no contest. None of Greenbang’s relatives can secrete enzymes to clean dioxins from polluted soils and none of her mates have made it cheaper to convert lignocellulose to fermentable sugars.

The achievements of mushrooms, meanwhile, are building up.

According to new research from Iowa State University and the University of Hawaii, introducing microscopic fungus into dry-grind ethanol production (where corn, sugar and enzymes are smushed together to make ethanol) means less energy is needed in the process and more water is recycled.

During the dry grind process, you see, there’s a lot of leftovers, including thin sillage – only half of which can be recycled into ethanol production.

Over to the researchers:

The fungus can also be harvested. It’s a food-grade organism that’s rich in protein, certain essential amino acids and other nutrients. It can be dried and sold as a livestock feed supplement. Or it can be blended with distillers dried grains to boost its value as a livestock feed and make it more suitable for feeding hogs and chickens.

Hans Van Leeuwen, leader of the research project, said all of that can save United States ethanol producers a lot of energy and money at current production levels:

• Eliminating the need to evaporate thin stillage would save ethanol plants up to $800 million a year in energy costs.
• Allowing more water recycling would reduce the industry’s water consumption by as much as 10 billion gallons per year. And it allows producers to recycle enzymes in the thin stillage, saving about $60 million per year.
• Adding value and nutrients to the livestock feed produced by ethanol plants would grow the market for that feed by about $400 million per year.
• And the researchers’ fungal process would improve the energy balance of ethanol production by reducing energy inputs so there is more of an energy gain.

Van Leeuwen estimated it would cost $11 million to start using the process in an ethanol plant that produces 100 million gallons of fuel per year. But, he said the cost savings at such a plant could pay off that investment in about six months.