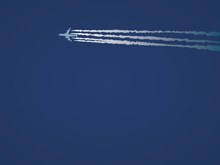 Greenbang once had the pleasure of flying business class. On arrival she was asked by a smiling stewardess: “champagne or orange juice?” Greenbang assumed this was a trick question, posed by the powers that be to assess her suitability to be flying among the great and the overly monied. She of course did the decent thing and asked for both.

In future, in the alternate reality where Greenbang travels regularly on business class flights, her champagne will be served in plastic rather than glass. It’s all part of a plan by airlines to cut the weight of their aircraft and so be more fuel efficient, according to Wired and the Associated Press.

Among the weight cutting initiatives practiced by airlines are slashing the weight of meal trolleys and even cutlery and in-flight snacks, while some odds and ends like magazine racks, heavy wiring and ovens are getting dumped entirely.

Other airlines are preferring to cut out weight from their passengers: The Houston Chronicle says United is taxing those bringing on more than one bag, Air New Zealand is reportedly thinking about it, and some budget carriers like Australia’s Jetstar are already doing it, tiering fares depending on luggage.

With all that cost cutting, let’s pray there’s not more of this sort of behaviour on the cards…