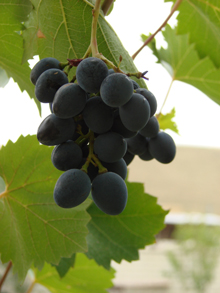 Greenbang likes this story a lot. She would even go so far as to say “Moi, j’aime cet article”, mainly because she wants to show off her French GCSE. The story that prompts this educational grandstanding comes courtesty of The Observer: French winemakers are turning to water transport rather than road to cut the emissions associated with shipping their products. And good on them for that, Greenbang says.

The Observer says that later on this month, 60,000 bottles of sweet sweet vin from Languedoc will be brought by boat to Ireland, and in the future, more could be gently punted off to Bristol, Manchester and even Canada. And there’s more:

The three-mast barque Belem, which was launched in 1896, the last French merchant sailing vessel to be built, will sail into Dublin following a voyage from Bordeaux that should last about four days. The wines will be delivered to Bordeaux by barge using the Canal du Midi and Canal du Garonne, which run across southern France from Sète in the east, via Béziers in Languedoc. Each bottle will be labelled: ‘Carried by sailing ship, a better deal for the planet.’ Although the whole process will end up taking up to a week longer than a flight, it is estimated it will save 4.9oz of carbon per bottle.