Freesheets face up to recycling responsibility 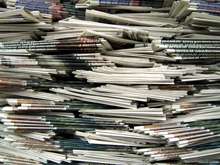 Call Greenbang a curmudgeon (she won’t mind and you wouldn’t be the first) but she’s very pleased to hear that the London freesheets have been forced to open up recycling points across London for their gratis irritants.

At least it gives commuters somewhere to dispose of the cobblers thrust into their hands by the aggressive purple paper pushers and hopefully stop people from redecorating Tube carriages with discarded celebrity rumours.

These stats courtesy of The Guardian.

The mountain of discarded newspapers in the capital has been a big issue since the freesheets launched in September 2006, with councils in central London and London Underground complaining about the increased clean-up bill.

The two papers distribute about 900,000 copies across London every day between them and newspapers account for 24% of street waste in the West End.

Greenbang thinks this is an interesting example of manufacturers being forced to take responsibility for the disposal of their products. More please. Crisp packets and burger boxes, next please.