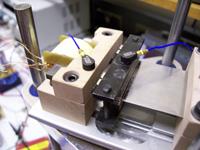 Energy “harvested” from vibrations in the environment could be powering our mobile phones, heart monitors and many other devices within the next five years, UK researchers predict.

The concept of energy harvesting has been around for over a decade, but researchers at the University of Bristol aim to tap the power of a much wider range of vibrations than is currently possible. They’re exploring ways to harvest the vibration energy of everything from helicopters and trains to household appliances and the movement of the human body.

Commercial energy-harvesting devices already exist which, for instance, use vibrations from industrial pumps to power sensors that monitor the pumps’ condition.

“Vibration energy-harvesting devices use a spring with a mass on the end,” said Stephen Burrow, who is leading the project funded by the Engineering and Physical Sciences Research Council (EPSRC). “The mass and spring exploit a phenomenon called resonance to amplify small vibrations, enabling useful energy to be extracted. Even just a few milliwatts can power small electronic devices like a heart rate monitor or an engine temperature sensor, but it can also be used to recharge power-hungry devices like MP3 players or mobile phones.”

Existing devices can exploit only vibrations within a narrow range of frequencies (the frequency is the number of vibrations occurring per second). If the vibrations don’t occur at the right frequency, very little power — not enough to be usable — can be produced. This is a big problem in applications like transport or human movement, where the frequency of vibrations change all the time.

However, the Bristol researchers are developing a new type of device where the mass and spring resonate over a much wider range of frequencies. This would enable a much wider range of vibrations to be exploited and so increase the overall contribution that energy harvesting could make to energy supplies. The team believes it can achieve this by exploiting the properties of non-linear springs, which allow the energy harvester to respond to a wider range of vibration frequencies than conventional springs.

Energy harvesters generate low-level power on a similar scale to batteries but without the need for battery replacement or disposal of potentially dangerous and polluting chemicals. They are also suited to applications where hard wiring would be impracticable, vulnerable to damage or difficult to access for maintenance purposes.

Energy harvesters could be used extensively, for example, to provide power for wireless monitoring and diagnostic sensors that generate data on:

“There’s a huge amount of free, clean energy out there in the form of vibrations that just can’t be tapped at the moment,” Burrow said. “Wider-frequency energy harvesters could make a valuable contribution to meeting energy needs more efficiently and sustainably.”