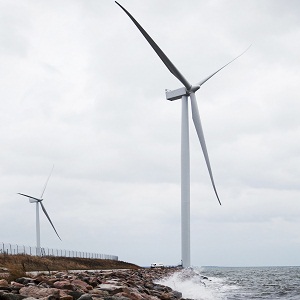 Nuke-rejecting Germany plans to expand its renewable energy base even further with a new offshore power wind-energy plant featuring 80 massive turbines with rotors 120 meters (394 feet) across.

Siemens Energy plans to supply the 3.6-megawatt (MW) for the Amrumbank West project in the North Sea. Being developed by Amrumbank West GmbH, a subsidiary of E.ON AG, the wind farm will have a total installed capacity of 288 MW — enough to meet the needs of around 300,000 households — when it goes online in 2015.

“Our offshore technology will play a substantial role in building up a clean electricity supply in Germany,” said Felix Ferlemann, CEO of Siemens Energy’s Wind Power Division. This is the company’s seventh German order for offshore wind turbines.

They are the same turbines Siemens is installing for the London Array, which — with 175 turbines in all — will be the world’s largest offshore wind power plant.

Offshore wind energy is expected to make up about 20 percent of the world’s wind-power market within five years. By 2030, Siemens predicts that Europe alone will generate 80 gigawatts of energy from offshore wind farms. That’s about half of all the energy produced by Germany’s existing fleet of power plants.

In response to Japan’s ongoing Fukushima nuclear disaster, Germany this year announced it would decommission all its nuclear power plants by 2022. Citing similar concerns, Siemens is also withdrawing from the nuclear energy industry.