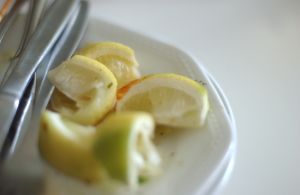 While the idea of dumping your dinner scraps and mouldy bread into a kerbside bin labeled “food recycling” might sound disgusting, food recycling isn’t what you might think. No one will be forced to eat the edibles you’ve tossed.

In launching its new food recycling programme this summer, the UK’s Camden Council aims to use households’ unwanted leftovers to produce nutrient-rich compost and soil conditioner. Another green benefit is that food waste will be kept out of landfills, where — as it decomposes — it generates methane, a powerful greenhouse gas.

For Camden, the new programme is also designed to be a money-saver. The council has to pay for every tonne of waste it sends to landfill, and that cost gets passed on to taxpayers. With food currently accounting for about one-third of the average rubbish bag, the savings could prove significant.

The first of Camden’s new food recycling bins began rolling out this summer to street-based homes, and more were delivered to three housing estates this Monday. The programme will be expanded over time until the entire borough is covered sometime in the summer of 2011.

“We are committed to helping people lower their carbon footprints,” said Councillor Sue Vincent, Cabinet Member for Environment on the Camden Council. “I am delighted that the council has managed to make food recycling possible for people on estates, even those living in high-rise blocks.”