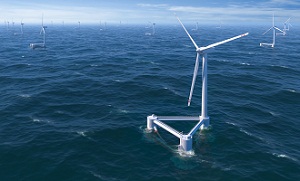 Until now, commercial offshore farms have all featured “bottom-mounted” turbines in depths below 50 meters. This has allowed the UK, with its shallow coastal waters, to install 538 offshore turbines totaling 1,708 megawatts (MW) — equal to the rest of the world combined.

But the rewards of deep-water wind power could be far more substantial. It could harvest clean energy from previously untapped areas, capturing the stronger, more consistent winds which blow miles offshore. And it has other environmental plus points too. Floating turbines avoid the risk of damaging fragile seabed ecosystems. And thanks to their location out of sight of land, they avoid being shot down by the “visual impact” campaigns which have done so much to stymie the growth of onshore wind power in the UK.

Seattle-based Principle Power’s WindFloat foundation could achieve all these benefits. In November 2011, a 2-MW turbine was connected to a WindFloat platform in Portugal, then towed 350 kilometers to its final Atlantic location. Already connected to Portugal’s grid by an undersea cable, it will remain there for two years of testing.

WindFloat’s performance will be closely compared to that of Statoil’s floating Hywind, installed off the Norwegian coast in 2009 with a 2.3-MW turbine. Statoil secured the steel cylinder filled with water and rock ballast in position with the help of
three mooring lines. WindFloat is stabilized by three submerged water ballast columns. The turbine is fixed above one column with relatively little water ballast, and balanced by two much “heavier” ones, forming a triangle with the main column.

It was the first offshore turbine deployed without any heavy lifting equipment at sea, promising crucial cost savings. Principle Power has not disclosed likely commercial costs of WindFloat, but reports suggest the initial project cost under $30 million, compared to $75 million for Hywind. The latter generated 15 megawatt-hours (MWh) of electricity in under two years, providing a target for WindFloat.

In a fresh twist which is rich with resonance for energy politics, Japan is poised to start work on a floating wind farm off Fukushima, using reconstruction budget funds allocated following 2011’s earthquake and tsunami. Its initial capacity of 12 MW could be extended to 1 gigawatt (GW) by 2020.

Editor’s note: This was a guest article by writer Robin Yapp that originally appeared in Green Futures. Green Futures is published by Forum for the Future and is the leading magazine on environmental solutions and sustainable futures. Its aim is to demonstrate that a sustainable future is both practical and desirable — and can be profitable, too.