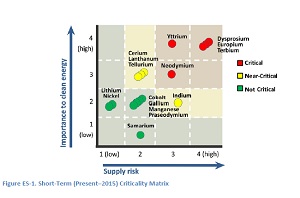 With budget cuts, rampant climate-change denial and a Republican party eager to turn back the clock on efficiency efforts, the US was already facing enough roadblocks on the path to a cleaner-energy future. Now along comes the news that five rare earth elements that are vital for technologies like wind turbines, electric cars and efficient lighting face a critical supply risk over the next several years.

In its latest assessment of important materials, the US Department of Energy (DOE) has ranked the rare earth elements dysprosium, terbium, europium, neodymium and yttrium as “critical” in terms of short-term supply, meaning supply issues that could arise between now and 2015. All five elements are highly important for clean-energy technologies, have few material substitutes and come from a narrow range of producers … which means an unexpected supply glitch or trade dispute could have quick, deep ripple-effects through the green-tech sector.

For example, yttrium, which is used in compact fluorescent lamps, must be 100-percent imported — mostly from China — because there are no sources being mined or refined in the US. And dysprosium, more than 90 percent of which comes from China, is vital for magnets that can operate at high temperatures (such as in vehicle drives). Worse yet, the only viable substitute for dysprosium is terbium, which is even more rare and tends to be more expensive as well.

Concerns about reliable supplies of these critical rare earths have already led to companies working on wind turbines and electric cars to seek ways to minimize their exposure to market ups and downs, according to the “DOE’s 2011 Critical Materials Strategy.”

“Manufacturers of both technologies are currently making decisions on future system design, trading off the performance benefits of neodymium and dysprosium against vulnerability to potential supply shortages. For example, wind turbine manufacturers are deciding among gear-driven, hybrid and direct-drive systems, with varying levels of rare earth content. Some EV manufacturers are pursuing rare-earth-free induction motors or switched reluctance motors as alternatives to PM motors.”

Despite their name, many rare earth materials aren’t in fact that rare. However, the fact that so much of the supply has come from just a handful of sources — China, in particular — has in recent years begun raising red flags for the DOE and other organizations focused on clean-energy technologies. The Energy Department began developing its first strategic plan for rare earth supplies last year.

Such plans, said US Energy Secretary Steven Chu, are aimed at helping the US “seize opportunities, using American innovation to find substitutes, promote recycling and help secure supplies of rare earth elements and other materials used in energy technologies.”

David Sandalow, Assistant Secretary for Policy and International Affairs, is scheduled to discuss the findings of the latest strategic assessment in Washington, DC, on January 5.