First look: inside the UK’s only carbon neutral housing estate 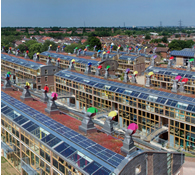 A friend of Greenbang’s has just bought a house on the Bedzed development in . It is the only carbon neutral housing estate in the and includes grey water recycling, a local combined heat and power station and directional wind funnels on the roofs to ensure residents aren’t asphyxiated by the intense double glazing.

The best feature of all is the lack of central heating. A clever combination of insulation, massive South-facing windows and foundation walls that act as a storage heater in winter, makes for sufficient warmth not to need radiators, even in February. On a more prosaic note, it also gives the house a two-storey glass-fronted hallway, with upstairs inside-outside balcony and glorious sunshine throughout.

And according to current residents, the utility bills are around 10% the level you would expect in a normal house.

The only downside of the whole scheme is that Greenbang’s friend was looking forward to avoiding Stamp Duty, thanks to Gordon Brown’s eco-friendly Budget in March. Only it turns out the exemption only applies to the first sale of newly-built properties. Fine for builders thinking of taking part in the 20,000 house-building bonanza announced almost as soon as Brown took over as prime minister. But less fine for Greenbang’s friend, who will have to cough up £8500 more than he had thought.