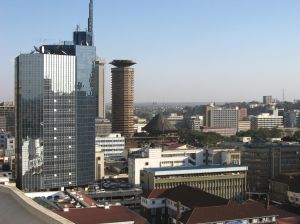 Faced with growing pains that might be hard for residents or smaller or quieter cities to imagine, Nairobi could find its way to a more livable future with the help of smart technologies.

Leaders from across the region came together together today to discuss those possibilities during the Nairobi Smarter Cities Roundtable, an IBM-organized gathering that was one of the first of its kind in Africa.

“With half of Kenyans set to be living in cities by 2030, the single biggest challenge facing Kenyan cities is how to manage and harmonize our city systems,” said Bitange Ndemo, Permanent Secretary, Ministry for Information and Communication. “Better functioning cities not only help to increase the standard of living for their citizens, but also increase their global competitiveness and support economic development.”

While a number of smart-city initiatives — Konza and Tatu cities, for example — are under way in Kenya, Nairobi is the nation’s single largest urban challenge, Ndemo said.

One strategy IBM is currently exploring with Nairobi’s telecommunications companies is using mobile phone signal density to pinpoint and predict traffic jams and assist city authorities in redirecting traffic. IBM also expects to release a white paper and video based on the roundtable discussion by later this year.