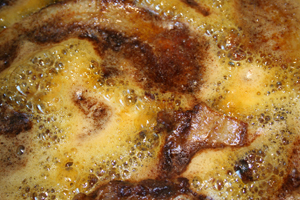 While you sleep, they’re out there prowling – on the hunt for yellow gold.

Oh yes – the fat hunters are striking. The New York Times says that miscreants, driven by higher oil prices, are raiding the bins of fast food outlets, looking for unwanted fat that can be used for biodiesel. (Greenbang would like to add here that if anyone still needs unwanted fat, she may or may not have a bit spare on her arse).

The paper says one raider was caught outside Burger King with 2,500 gallons of used fryer grease – worth around $6,000 at today’s price. A few years ago, it would have been worth a quarter of that.

After previously having paid people to collect their unloved used grease, some restaurants are apparently now flogging the fat to grease companies for use in biofuel.

Apparently, grease thefts have been spotted in 20 states and some restaurants are turning to surveillance cameras to track down the light-fingered fat thieves.

One fast food shop owner tells the Times: “I cook food. I’m not going to stay up until 2 in the morning trying to catch someone stealing a barrel of grease.”