Eurostar goes green, and here’s why… 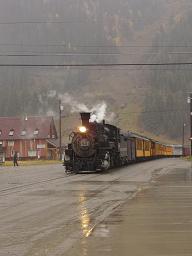 Green travel is important for any business. And so it is that many a technological green giant has invested in a bit of carbon offsetting to ease its burden on the blue planet.

Interestingly, Greenbang had a conversation with one of the top bods over at Eurostar who revealed that its own carbon cutting plan was not necessarily of its own invention.

Big companies, keen to prove they were carbon-cutting, got hold of the train operator and asked it how green it was compared to flying. Never having thought about it, Eurostar commissioned a report that concluded, unsurprisingly, it was in fact far greener than bouncing through the air and dumping aviation emissions into the atmosphere.

Within the next year Eurostar was flaunting its greenness as part of a major marketing push. Now, to prove it walks the walk, the firm plans to reduce its overall emissions by 25 per cent per passenger journey by 2012, and is offsetting carbon emissions at its own expense.

It is doing so with Carbon Clear, who Greenbang kind of likes.