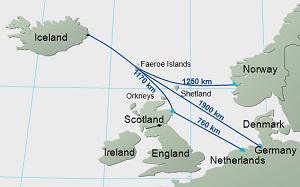 Iceland is poised to begin exporting its surplus geothermal energy to Europe, thereby boosting its economy and increasing the share of the continent’s power needs which can be met by renewable sources. Electricity utility Landsvirkjun has announced plans to build the world’s longest submarine high voltage direct current (HVDC) power cable, reaching up to 1,900 kilometers (1,181 miles), which could interconnect with the proposed European offshore “supergrid.” If completed, this could see renewable electricity flow across the continent, including geothermal from Iceland, wind from the North Sea and solar from southern Europe.

Geothermal already supplies over a quarter of Iceland’s energy needs, including 90 percent of its heating. But this represents a fraction of its total geothermal potential, with accessible capacity estimated at around five times the current amount. According to Peter Rose, geothermal specialist at the University of Utah, the promise of export revenues via the new cable could provide the economic incentive needed to exploit this resource to the full.

“It would provide a huge market that would spur development,” he says.

Clearly the sheer scale of the project provides an immediate hurdle, and financing would need to come from a range of sources. While Landsvirkjun has previously issued bonds and agreed loans with the European Investment Bank and state-owned Landsbanki, other options include the kind of club lending deals seen in the offshore wind sector. With concern over energy security and fluctuating oil and gas prices across Europe, an injection of “home-grown” renewable power has increasing economic and political appeal.

Earlier this year, search engine giant Google bought a stake in the proposed $5 billion Atlantic Wind Connection. This transmission line is intended to carry up to 6 gigawatts (GW) of energy generated from offshore wind farms — a recent example of the growing scale of these projects, as well as potential costs.

Editor’s note: This was a guest article by writer Benjamin Chambers that originally appeared in Green Futures. Green Futures is published by Forum for the Future and is the leading magazine on environmental solutions and sustainable futures. Its aim is to demonstrate that a sustainable future is both practical and desirable — and can be profitable, too.