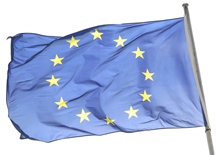 The European Commission is good for many things. Chiefly giving the Daily Mail an excuse to print stories about those crazy Brussels bureaucrats banning bananas that were deemed too curvy. And it’s also good kicking Europe’s carbon offenders into line.

The venerable grey-haired fellows at Brussels have come up with the idea of a European Strategic Energy Technology Plan to push all that low-carbon goodness.

In its announcement about the plan, the Commission said :

The inter-related challenges of climate change, security of energy supply and competitiveness are multifaceted and require a coordinated response. We are piecing together a far-reaching jigsaw of policies and measures.

The word jigsaw gave Greenbang a bit of start. Jigsaw sort of implies ad hoc, bits lost down the back of the sofa, confusion and frustration, and no coherent picture emerging til the very end, if everything goes well. Hopefully it’s just a matter of semantics rather than a telling metaphor for the EC’s energy plans.