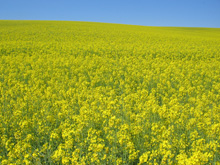 In a bit of a get-your-tractors-off-our-lawn type news, the European Commission has given overseas biofuel makers a bit of a two-fingered salute with a new law that may ban the import of some biofuels, set to be revealed next week.

It’s expected to mess up imports of palm oil and fuels from Latin America.

But before you wonder if the EC has strayed into Daily Mail territory – your bananas must be straighter! etc – then have a read of this snippet from the New York Times, which explains the fuss:

If approved by European governments, the law would prohibit the importation of fuels derived from crops grown on certain kinds of land — including forests, wetlands or grasslands — into the 27-nation bloc.

The draft law would also require that biofuels used in Europe deliver “a minimum level of greenhouse gas savings.” That level is still under discussion.

So that’s all alright then? Or are you still worried biofuels might do more environmental harm than good? Let us know what you reckon – it’s what the comment function’s there for. The Royal Society has already weighed in this week, saying biofuels:

risk failing to deliver significant reductions in greenhouse gas emissions from transport and could even be environmentally damaging unless the Government puts the right policies in place.