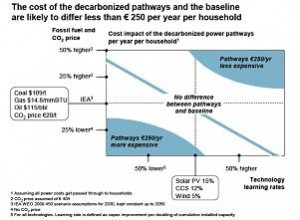 The good news? Europe could cut its greenhouse gas emissions by 80 per cent by 2050. The bad news? It needs to start making the transition to an energy infrastructure that’s nearly carbon-free starting now.

In its new “Roadmap 2050” report, the European Climate Foundation says such an energy infrastructure is possible with development and deployment of technologies that are already available today or in the late stages of development. The system would also require the expansion of the energy transmission grid across Europe.

While the outlay required for building such a system would be steep — increasing from €30 billion annually in 2010 to €65 billion a year in 2050 — the report says neither the cost of electricity to consumers nor overall economic growth would suffer … as long as:

Needless to say, that’s a lot of ifs.

Oh, and if we don’t start on this path, like, right now, the goal of achieving a low-carbon, clean-energy future gets even harder.

“Realistically,” the report’s executive summary states, “the 2050 goals will be hard to realise if the transition is not started in earnest within the next five years. Continued investments in non-abated carbon-emitting plants will affect 2050 emission levels. Continued uncertainty about the business case for sustained investment in low-carbon assets will impede the mobilisation of private-sector capital. Waiting until 2015 (or later) to begin to build the large amount of required infrastructure would place a higher burden on the economy and the construction industry. Delay
would also increase the challenges in transforming policies, regulation, planning and permitting.”

In fact, a 10-year delay in getting started would up the transition’s cost considerably … to more than €90 billion a year in 2035, the report warns. Scaling up all the supply chains in time would also become much more difficult, and all the while, carbon dioxide emissions would keep rising.

“Taking all this into account, it is not difficult to see that technological, regulatory and collaborative activities
have to start now in order to ensure a realistic pathway towards achieving the 80 (per cent greenhouse gas) reduction by 2050,” the report notes.

Between now and 2015, Europe will need to set the stage for a low-carbon energy transition by making the following top priorities:

“Achieving the 80 per cent reduction means nothing less than a transition to a new energy system both in the way energy is used and in the way it is produced,” the report states. “It requires a transformation across all energy-related
emitting sectors, moving capital into new sectors such as low-carbon energy generation, smart grids, electric vehicles and heat pumps … Despite the complexities, the transformation of the European power sector would yield economic and sustainability benefits, while dramatically securing and stabilising Europe’s energy supply.”