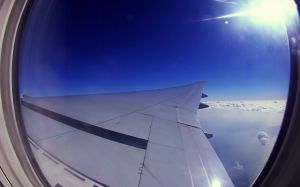 It’s official, air traffic will be included in the EU’s emission trading scheme come 2012.  To stop the likes of BA, SAS, Easyjet etc. getting round the legislation it will cover all flights landing on and taking off from EU soil.

The FT’s environment writer, Fiona Harvey, has already described the announcement as ” biggest environmental constraint yet placed on airlines anywhere in the world”

Whilst air traffic accounts for just 3 per cent of greenhouse gas emissions, it is rising and air travel is expected to double in the EU by 2020.  There are also suggestions from campaigners that CO2 from planes causes more damage because they’re emitted at altitude.

The legislation also places tight controls and forces the industry to find cleaner technology.  According to the industry journal, Jane’s, The first year’s permits will allow for just 97 per cent of estimated emissions – based on previously recorded levels. A year later this falls to 95pc.  Whilst the majority of the quota comes for free, 15 per cent will have to be purchased at auction.  This proportion may also rise.

The FT has reported that the industry (what a shock) isn’t happy and that ‘shipping and other transport may be covered in future.’

Speaking to the FT:

“In terms of noticeable developments [in the past year], I would say [there has been] increased industry unity around environmental issues, including signing an industry declaration among aviation leaders; strong progress in efforts to identify renewable forms of sustainable biofuel plant sources, [including a] successful demonstration flight with [Virgin Atlantic Airlines] and GE Aviation, and the first flight powered entirely by fuel-cell technology.”