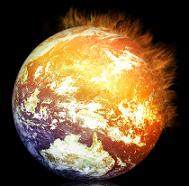 That holiday for representatives of the UN is in danger of being spoilt over the continued opposing view of the US and the EU, VOA News reports today.

A split has emerged at the conference here between the European Union and the United States, over whether or not to set firm targets for cuts in greenhouse emissions. Yvo de Boer, who is heading the U.N. sponsored meeting, warned Thursday that the deadlock is threatening to derail the desired negotiations.

“I think what’s at stake here for the United States, and in fact for everybody else that’s here, is whether we can put in place in time a long-term climate policy that will kick in when the Kyoto Protocol’s first commitment period expires in 2012,” he said.

The dispute led European nations Thursday to threaten to boycott U.S.-sponsored climate talks next month unless Washington changes its mind.

The war of words between the US and the EU over climate change policy escalated today as the EU threatened to boycott US-led talks on the environment if it continued to block emissions targets.

Humberto Rosa, the environment secretary of Portugal, which currently holds the EU presidency, said today: ‘If we [were to] have a failure in Bali it would be meaningless to have a Major Economies’ Meeting (MEM) in the United States.

Haggling over numbers now was counterproductive, said Jim Connaughton, the chairman of the White House council on environmental quality.

The United States is the world’s largest emitter of greenhouse gases. and the only major industrial country to have rejected the Kyoto protocol.

The fact of the matter is that whether the US agree to join in or not – we must take serious measures in order to prevent this planet’s early decay. Throwing toys out of the pram won’t get us anywhere.