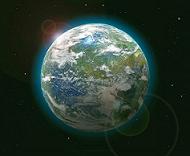 Scientists in Israel reckon they’ve come up with the answer to our global warming problem with an energy tower full of water. Seriously.

Technion have been working on this for 25 years and it’s all based around heat rising, or rather the lower temperatures falling. Some call it convection.

InventorSpot has this to say:

Any kind of water – from a sea or drainage ditch – would be added to the top of the tower. The water would cool the hot air at the top, and the heavy cooled air would sink downwards, gathering speed as it falls, and would be used to power turbines at the tower’s base. The turbines would be connected to a generator, which produces electricity.

The researchers predict that the project would be cheap – electricity generated from this method would cost just 2.5 cents per kilowatt-hour, which is less than a third of the cost of electricity in Israel today. It’s also cheaper than solar, hydro-electric, and wind power.

The researchers are still looking for funding to continue, and Greenbang thinks that games-console manufacturers should stump up some cash. It could be in their best interests.