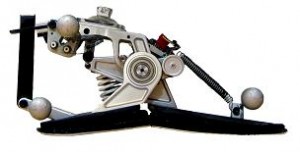 has a lot of benefits, but here’s one you might not have considered yet: easier walking for foot and leg amputees.

Researchers at the University of Michigan say they’ve developed a new type of artificial foot that nearly halves the amount of extra effort amputees need to exert with every step. The device uses a microcontroller to capture what would otherwise be lost energy, then releases that energy at just the right moment to boost ankle push-off.

“For amputees, what they experience when they’re trying to walk normally is what I would experience if I were carrying an extra 30 pounds,” said Art Kuo, professor in the University of Michigan departments of biomedical engineering and mechanical engineering.

Kuo added, “All prosthetic feet store and return energy, but they don’t give you a choice about when and how. They just return it whenever they want. This is the first device to release the energy in the right way to supplement push-off, and to do so without an external power source.”

Today’s typical prosthetic can’t fully reproduce the force that a human ankle exerts to push off the ground. As a result, amputees use 23 per cent more energy than normal when walking with an artificial foot.

Tests show the new energy-recycling foot brings that power requirement down to 14 per cent. The improved device captures some of the power usually wasted during walking energy, and uses it to enhance the power of ankle push-off. Because it takes advantage of power that would otherwise be lost, the new prosthetic uses less than 1 watt of electricity through a small, portable battery.

“We know there’s an energy penalty in using an artificial foot,” Kuo said. “We’re almost cutting that penalty in half.”

Steve Collins, who developed the new prosthetic device with Kuo and is now an associate research fellow at Delft University of Technology in the Netherlands, added, “Individuals with lower limb amputations, such as veterans of the conflicts in Iraq and Afghanistan or patients suffering from diabetes, often find walking a difficult task. Our new design may restore function and reduce effort for these users. With further progress, robotic limbs may yet beat their biological forerunners.”