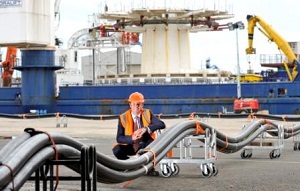 With wind turbines becoming a familiar part of the scenery in many places, and the cost of photovoltaic (PV) solar power approaching “grid parity” (ie, the point where it’s as affordable as “regular” electricity from coal or gas), is the renewables industry ready to take on its next challenge: ocean energy?

A growing number of  signs suggest that could be the case.

Across the British Isles, efforts to harness the region’s vast marine energy resources appear to be reaching critical mass. The southwestern coast of England alone, recently dubbed the nation’s first “Marine Energy Park,” holds the promise of providing up to 27 gigawatts of energy by 2050. UK officials are talking about loosening regulations to speed up activities at Wave Hub, a research facility that’s essentially a giant “socket” designed to help new ocean-energy technologies plug into the national grid. And countries from Ireland to South Korea, Canada to Australia, are wrapping up tests of a range of marine-energy pilot projects and are now moving to larger-scale deployments.

EMEC this month signed a deal with the Ocean Energy Association of Japan to develop Japan’s own first marine energy research facility.

Then there’s an energy technology giant like Siemens, which recently expanded its stake in a British ocean-energy company called Marine Current Turbines Ltd. and has now sunk €470 million (just over $620 million) into a company that makes components for subsea power grids.

With its acquisition of the connectors and measurements division of Expro Holdings UK, Siemens aims to strengthen its position in the “attractive future market for subsea power grids,” says Adil Toubia, CEO of the oil & gas division at Siemens Energy. Expro’s focus remains old-fashioned fossil fuels instead of marine power, but those energy sources too are becoming more dependent on deep-sea technologies.

In fact, deep-sea applications are currently one of the fastest-growing market segments in the oil and gas industry, with the market expected to reach €2 billion (about $2.6 billion) by 2020.