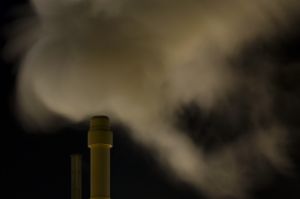 The UK government has slipped out the terms for the controversial auction of European Union emissions trading permits.

The controversy around the EU Emissions Trading System is that traditional big carbon polluters will be able to buy emissions allowances to help them meet emissions reduction targets – with the government claiming this is fine because the net overall emissions target for the country isn’t affected.

The auction is being handled by the Department for Environment, Food and Rural Affairs – more details here.

The government is aiming to hold the first auction before the end of the year and reports estimate this emissions trading will bag the Treasury up to £2bn by 2012.

Environment minister Phil Woolas claims the auctions will create financial incentives for the big carbon emitters – who used to get their emissions permits free but will now have to pay – to reduce their emissions. He says in a Financial Times interview:

“This will help stimulate the development of green technology and British business can begin to realise the benefits of being leaders of the low carbon revolution.”

In this phase of the government’s ‘National Allocation Plan’ between 2008 and 2012 the UK will auction seven per cent of its emissions permits – approximately 85 million. These permits have been taken from the allocation that would have been given for free to large electricity producing sector.