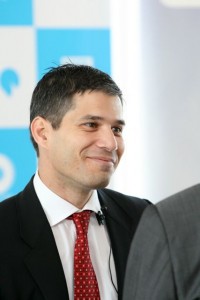 Four years from now people in Melbourne, Sydney and Brisbane will have the infrastructure to make the widespread use of electric cars a reality.

Under the agreement Macquarie will raise $1bn to build an electric-vehicle network, with AGL powering it with renewable energy.

Better Place, founded by Agassi, has designed the infrastructure model which is currently being rolled out in Israel and Denmark.

Under the agreement, the three major Australian cities will each have a network of between 200,000 and 250,000 charge stations where drivers can recharge their electric cars at home, in businesses, car parks and shopping centres.

In addition, there will be 150 switch stations in each city and on major freeways where electric batteries can be automatically replaced in drive in stations similar.

“It’s a massive infrastructure project and that means new jobs for Australians.”

Drivers will pay to recharge their cars through various power supply agreements, similar to mobile phone contracts where customer choose the rate that best reflects their use.

Agassi said it is up to Australian government to determine how it will encourage consumers to turn to electric cars, such as through tax incentives or free power for the first purchasers.

“Its more a question for the government for how quickly they want the tipping point to happen.”