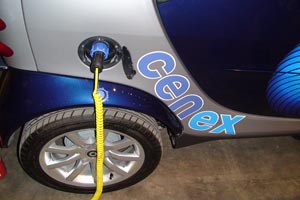 Christmas times were always filled with wonder when Greenbang was a child. Daddy G sat dressing the tree with a mass of tinsel and always failing to get the fire lit.

Remote control cars were always the favourite. But there was usually a glitch. The batteries never lasted long enough and then took an age to recharge so that it was already the 29th of December before she got to race them against the bigger brother.

Having sat in a very hot, slightly smelly seminar room at the Green Car Guide Live! show Greenbang has been reminded of these Christmases. You see, one of many problems with electric cars is the recharging time. 50-100 miles followed by an overnight charge doesn’t really work when you’re trying to get to Dundee from London in a day.

However, in the middle of the slow day, and it was, a statement was made by Allied Vehicles’ MD, Paul Nelson that perked Greenbang up a little. The Glasgow based company is working with different battery types and suppliers and thinks it has hit on something rather nice, “a charge time of just 12 minutes for an electric bus.”

The batteries will still deliver 60 miles and will be Glasgow is keen to get its hands on the technology. According to Paul Nelson, “the city is aiming to be amongst the UK’s cleanest when it holds the 2014 Commonwealth Games”.
However, the 12 minute recharge will be available much sooner. Speaking to Greenbang, Paul Nelson suggested it will be available within the year.