E.coli: the hydrogen maker of the future? 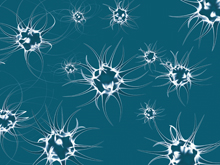 Here’s a hydrogen breakthrough that’s playing on Greenbang’s mind. Apparently, scientists at Texas A&M University have tinkered a bit with the genes of E.coli – removed six of them – and as a result the dodgy-burger bacteria can now produce hydrogen at a rate 140 times faster than it normal.

Just feed the modified bacteria a bit of sugar, and you’ve got your very own little fuel cell right there. Investor Spot has the lowdown:

The sugar could come from a wide variety of biofuels (e.g. corn), Wood explains. “A lot of people are working on converting something that you grow into some kind of sugar. We want to take that sugar and make it into hydrogen. … We’re going to get some form of sugar-like molecule and use the bacteria to convert that into hydrogen.”

This method of generating hydrogen could potentially be much less expensive than the conventional electrolysis technique (splitting water). With E. coli, Wood explains that capturing the hydrogen from the bacteria is easy and inexpensive. Because the gas bubbles up from the bacteria solution, “you just catch the gas as it comes out of the glass. That’s it. You have pure hydrogen.”

The article also reckons the bacteria could be used to make hydrogen on site where it’s needed, and not transported. Sounds good. But Greenbang is still a little bit scared at the prospect of having bacteria better known for killing pensioners than creating fuel in her hydrogen car.