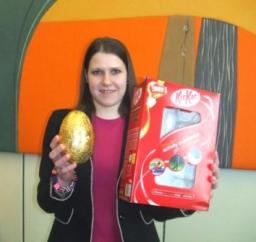 Easter egg makers have really messed up this year – they’ve been accused of using too much packaging.

That’s all very well, but the supermarkets haven’t exactly promoted a culture of minimalism when it comes to boxes and plastic.

Greenbang is surprised no one tried an anti-packaging PR campaign at Christmas though – the pickings were already ripe.

Now Lib Dem MP Jo Swinson has released a report that says the eggish packaging is just too much.

The key findings of the report are:

• Over-packaging is rife among Easter egg producers. In the worst cases, Easter eggs by Lindt and Nestle took up just 9% of the volume of their packages. Astonishingly, Nestle’s Easter egg actually showed an increase in packaging.

• There has been little action to reduce packaging levels. The major manufacturers’ standard packaging showed no significant reduction since 2007.

• Some signs of progress were observed: Cadbury’s has launched a new eco-egg product that uses minimal packaging, while Sainsbury’s and M&S both use packaging that is more efficient than their competitors’.

Jo will meet with DEFRA Minister Joan Ruddock on 24th April to call for greater efforts to cut excess packaging.