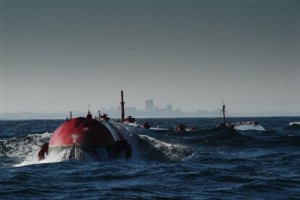 What is claimed to be the world’s first commercial wave power project opened off the coast of Portugal this week.

The €9m Aguçadoura project is the first of a series experimental wave energy projects by the Ondas de Portugal (Waves of Portugal) consortium, which is made up of Babcock & Brown, Energias de Portugal and Efacec.

British company Pelamis Wave Power is providing the equipment for the Aguçadoura project, which it has a 23 per cent  share in.

The second phase of the project will see the manufacture and installation of a further25 wave power machines, bringing the power capacity up to 21MW.

When it’s complete the project is expected to produce enough electricity to power more than 15,000 Portuguese households and displace more than 60,000 tonnes per year of CO2 emissions from conventional power plants.

Phil Metcalf, CEO of Pelamis Wave Power, said at the inauguration of the project this week:

“We see this project as an important strategic step  to  underpin  continued  commercial  growth and technological  development. We  can certainly  predict that  Portugal  will  benefit  substantially  from  taking  this  visionary lead  in developing its wave energy resources.”

The full press release is here.