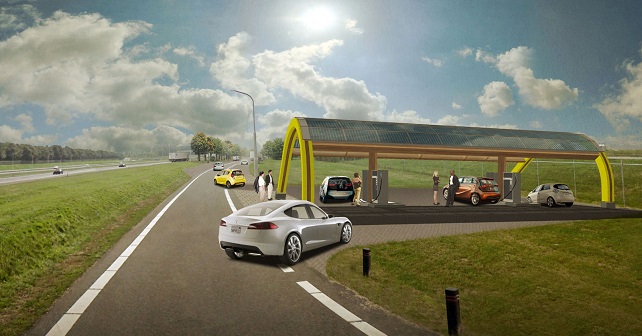 transport41
Getting a large segment of society to replace gas-powered vehicles with electric ones raises a chicken-and-egg problem: how can you promote a shift to...

Getting a large segment of society to replace gas-powered vehicles with electric ones raises a chicken-and-egg problem: how can you promote a shift to plug-in cars when drivers don’t have a convenient network of places at which to plug in?

For two electric-car-loving entrepreneurs, however, unique circumstances in the Netherlands offered a solution to that conundrum.

Reasoning that a single authority — the Rijkswaterstaat (Ministry of Infrastructure and the Environment) — oversees every service station location in the Netherlands, Michiel Langezaal and Bart Lubbers saw a way to help Dutch motorists go electric in one fell swoop: ask the agency for permission to add charging stations to the nation’s existing fuel sites.

So that’s what they did. And in January of 2012, the ministry said yes.

Langezaal and Lubbers, co-founders of a startup called Fastned, now had the go-ahead to start building fast-charging facilities for electric vehicles (EVs) at 201 of the nation’s 245 highway-connected service stations. When the project is completed, no one of the Netherlands’ 16.7 million residents will be more than 50 kilometers away from a place to charge an electric car. Every station will also feature a solar canopy to help generate power and reduce stress on the electric grid.

Fastned is now working with ABB to roll out a nationwide system of electric-car chargers. ABB’s chargers, which are set for delivery this September, will be able to fully charge an electric car in 15 to 30 minutes and will work for every major EV brand in Europe, Asia and the US. The chargers will also be cloud-connected to enable easy payment options for drivers.

Fastned expects to finish building its charging network by 2015. The result, Langezaal and Lubbers believe, will be a critical mass of charging stations that will help make electric cars not only convenient but appealing.

According to ABB, the project will make the Netherlands to date “the most populous country to roll out a nationwide fast-charging network.”

That goal, however, could still face some obstacles.

Shortly after Fastned announced its agreement with ABB, the Dutch public broadcasting organization NOS (Dutch) reported that the operators of 26 service stations along the nation’s highways are challenging the plan to roll out fast-charging facilities.

In their lawsuit, the operators allege that the plan violates the exclusive rights agreements they hold with the government through 2024. The suit also raises the concern that EV charging sites will also feature retail shops, for which Fastned and other EV companies would not pay government fees like service station operators currently do.

One issue the court will have to decide is whether electricity can be considered a “fuel,” presumably because such a ruling would establish that current service station operators also retain the exclusive right to offer EV charging services.