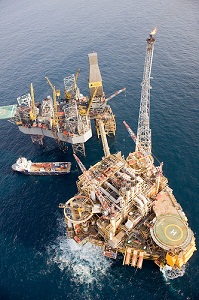 What’s the potential downside to a “Golden Age of Gas,” the International Energy Agency’s (IEA) description of a future with vast new riches of unconventional natural gas and advanced technologies like hydraulic fracturing?

For one answer, we might look to one of Total’s gas developments in the North Sea off the Scottish coast, where a long-problematic well is now the scene of an out-of-control blowout that’s bringing back memories of BP’s 2010 Deepwater Horizon disaster in the Gulf of Mexico.

According to Total, the leak began Sunday at the Elgin/Franklin development about 240 kilometers (149 miles) east of Aberdeen, Scotland. No injuries were reported, but all non-essential employees were evacuated from the Elgin platform by the end of the day, leaving behind a crew of 19 working to stop the leak. That team, too, was later evacuated.

Jake Molloy, a spokesman for the union representing oil and gas workers, told Reuters, “The well in question had caused Total some problems for some considerable time … a decision was taken weeks ago to try to kill the well, but then an incident began to develop over the weekend.”

As the plume of natural gas spread, two other nearby drilling platforms were evacuated out of concern a spark could set off a catastrophic explosion.

As of Wednesday, the gas leak “remains ongoing, although the situation is currently stable,” an update from Total stated. “A sheen is visible on the surface of the sea, but our surveillance data indicates that the area it covers remains unchanged.”

A flare on the Elgin platform — about 100 meters above the level of the gas — continued to burn, but prevailing winds continued to drive leaking gas away from the platform, so far avoiding an explosion.

Total is currently working to stop the blowout, but noted it could take six months to complete an emergency well to intercept the leak.

The Deepwater Horizon blowout, which involved oil rather than natural gas, continued for three months — from April to July, 2010 — before BP was able to stop the leak.

Producing since 2001, Total’s Elgin platform sits atop a site with estimated recoverable reserves of 18.4 billion standard cubic meters of gas and 148.5 million standard barrels of condensate, the term for natural gas liquids recovered from a gas well.