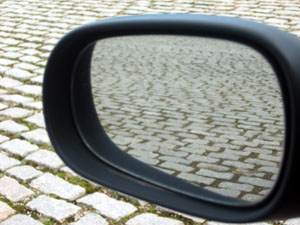 Greenbang wonders how effective green car marketing really is. Every time someone says hybrid, she doesn’t think of the clean tech, she thinks of that weird mouse that had a human ear attached to its back in the name of science. She thinks about that mouse a lot. Like, where is he now? Did the other mice bully him for his extraneous ear, or worship him as their rodent king?

Late last week, the hybrid lobby has got its hands on some cash, delicious cash. The US Department of Energy has decided to go halvsies with the like of General Motors, Ford Motor and General Electric on funding three demo projects for plug-in hybrid vehicles.

No word from the DoE as to whether having motor or general in your company name was mandatory to win the funding, but signing up to work on creating a motor that can go 40 miles on a single recharge was – according to the DoE, that’s how far most Americans go on their daily commute.

The projects, says the DoE, “will also address critical barriers to achieving DOE’s goal of making PHEVs cost-competitive by 2014 and ready for commercialization by 2016” and will run from 2008 to 2011.

All that, and for just $30 million in funding for the DoE. Bargain.

General Motors has been selected for negotiation of an award for a project aimed at enhancement of Lithium-Ion battery packs, charging systems, powertrain development, vehicle integration, and vehicle validation. Following development, the PHEVs will be deployed over a three year period into a demonstration fleet in three regions of the U.S. Other team members include Electric Power Research Institute (EPRI), University of Michigan Transportation Research Institute, and the Michigan Economic Development Corporation.

Ford Motor Company has been selected for negotiation of an award for a project to identify a pathway that accelerates commercial mass-production of PHEVs. The project will focus on development of battery systems and deployment of prototype PHEVs. The project will test and demonstrate the propulsion system design, controls, and communications necessary to develop a viable PHEV production program. Team members include Southern California Edison, Electric Power Research Institute, and Johnson Controls-Saft, Inc.

General Electric has been selected for negotiation of an award for a demonstration of PHEVs that relies upon an innovative dual-battery energy storage system capable of 40 miles accumulated electric driving range. The project will focus on developing the dual-battery energy storage system in parallel with vehicle integration. GE is partnering with Chrysler for this project.