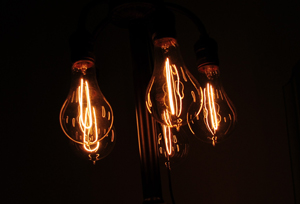 How smart are smart grids? Could they do the super hard Sudoku in the Sunday papers? Do they have doctorates in astrophysics? Can they get into a packet of digestives without using their teeth?

Greenbang doesn’t know. She’s never had one around for tea. But what she does know is that the US Department of Energy is pretty damn keen on them. So keen, in fact, that it’s going to spend $50 million over five years on nine projects that it hopes will make the whole grid more efficient and “aim to reduce peak load electricity demand by at least 15 percent at distribution feeders—the power lines delivering electricity to consumers”.

All this sort of stuff will become more and more useful to folks for managing electricity demand when electric cars start sucking out power from the grid, and people with home solar systems start chucking it back in.

Here are the lucky smart grid winners, courtesy of the DoE:

Consolidated Edison Co. of New York, Inc., along with Verizon, Innovative Power, Infotility, and Enernex, will develop and demonstrate methodologies to achieve true interoperability between a delivery company and end-use retail electric customers, enhancing the reliability of the distribution grid and the efficiency of its operations. (Duration: 3 years; Cost: $6.8 million federal/6.2 million non-federal)

The Illinois Institute of Technology (IIT) will collaborate with Exelon/ComEd, Galvin Electricity Initiative, S&C Electric, and others to develop and demonstrate a system that will achieve “perfect power” at the main campus of IIT through the implementation of distributed resources, advanced sensing, switching, feeder reconfiguration, and controls. This effort will be replicable at any municipality-sized system. (Duration: 5 years; Cost: $7 million federal/$5.2 million non-federal)