Do we have enough time to build an electric car future? 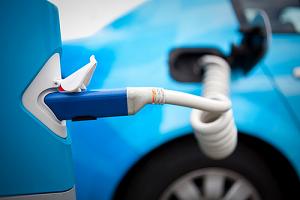 The future of transport might lie with electric cars, but will we be able to build the market and infrastructure before carbon and oil constraints create insurmountable hurdles?

The answer isn’t clear just yet. While hybrid cars, which use both battery and petrol power, are appearing more frequently on roads around the world and all the  leading automakers are leaping into plug-in vehicle projects, other obstacles besides carbon and oil are making it difficult to roll out fully electric cars on a grand scale.

As Deutsche Bank researcher Eric Heymann notes in an analysis today, “rapid structural changes are unlikely as many general problems surrounding electromobility have yet to be solved.” Foremost among those problems: the high pricetag for plug-in car batteries, which today falls in the range of €10,000 to €15,000.

Complicating that is the fact that electric car batteries remain too heavy and too short-lived, and still offer only a limited driving range before they need recharging.

“Moreover, batteries take a long time to be recharged, not all security issues have yet been solved, the infrastructure (e.g. charging stations) is still in its infancy and power generation also causes CO2 emissions,” Heymann writes. “Should the currently very high expectations regarding electromobility be quickly disappointed, this would be counter-productive for the long-term success of this promising technology.”

Among those working to help the budding electric-car industry meet its high expectations is Shai Agassi, who created the organisation Better Place in 2007. Better Place bases its mission on a model of “building open network infrastructure to enable mass adoption of electric vehicles and delivering transportation as a sustainable service.”

So far, Agassi’s company is valued at $1.25 billion (thanks in part to $350 million in new funding — “one of the largest clean-tech investments in history” — this past January) and has development projects under way in Israel, Denmark, Australia, the US, Canada and Japan. Agassi has stated his goal of making Israel the first country in the world to use only electric cars.

Nissan, which is working with Better Place through the Renault-Nissan Alliance, is also hoping to make a dent in the world’s carbon footprint for transportation with its new Leaf, the first all-electric car designed for the mass market. Priced at around $25,000 (around €18,600), the Leaf is set to be released this year. A unique aspect of the vehicle is that Nissan has priced it affordably by selling the car but leasing the battery.

Nissan says it currently has the capacity to build about 50,000 Leafs a year.

Around the globe, though, an all-electric transport system has a long way to go before making a dent in the number of fossil fuel-driven cars out there. While global hybrid registrations last year reached 598,739, according to HybridCars.com — and, mind you, that’s increasingly affordable hybrids, not fully electric cars — that’s a thin sliver compared to the estimated 806 million cars and light trucks on the world’s roads.

Let’s do the math: nearly 600,000 hybrids and 50,000 new Leafs a year versus 800-plus million petrol-powered vehicles. Clearly, making our transportation systems cleaner and less reliant on oil remains a tall order. With all the resource challenges on the horizon — peaking oil production, increasingly scarce rare earth metals, carbon regulations, etc. — peak time might prove our greatest hurdle to overcome.