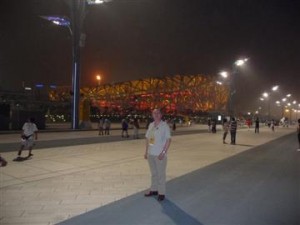 As Team GB continues to smash all its previous medals totals here’s the latest dispatch from Beijing from Shaun McCarthy, chair of the Commission for a Sustainable London 2012 (pictured left outside the Bird’s Nest stadium)

We have all heard the negative stories. Displacing thousands of people to build the Olympic Park in Beijing, the smog, the algae, the choking traffic and the alarming increase in demand for energy. However, there is a positive sustainability story to be told here and many lessons we can learn for London 2012.

On the social side, the city has recruited 1.5 million volunteers to help with the games, from the blue shirted people who assist at the venues and other key locations, including transport locations, to the social volunteers who have been trained simply to help people when they can. When I was standing in the Wanfujing district wondering how on earth I will cross an eight lane highway, a young man came over to direct me to the subway. The happy band of blue uniformed volunteers are mostly young, well educated, lively, optimistic and helpful. They are not always very well informed but they make you feel better about being lost and there are so many of them you will get the right answer eventually. What a wonderful social opportunity this is, to take part in a massive global event, to mix with people from all cultures and to learn a lot about their own city.

Thanks to my friends at LOCOG, I was offered the rare privilege of visiting the hallowed ground of the athletes’ village. This is a housing complex four times the size of the one that will be in London. All of the flats have already been sold for between $300,000 and $500,000 – no credit crunch here! The village is a haven of peace and tranquillity with trees and running water everywhere. This may not be the case in legacy; the four lane highway that runs through the middle of the village currently only sees the occasional hydrogen powered bus but will soon be choked with traffic. The broad paths that support a trend for athletes to whizz round on little electric “go-peds” have already been marked out for parking spaces.

I sat at the next table to Michael Phelps in the huge dining area and marvelled at the collection of youth and talent assembled here. Remembering my day job, I sneaked round the back to see the massive air conditioning units that have been deployed to keep the world’s elite athletes from over-heating while they are eating. This is only half the story. There are solar photovoltaic panels every 10 meters in the village, with further solar and wind powered resources on the roofs of buildings. Water from the roof of the iconic Bird’s Nest stadium is collected and used for irrigation. The authorities here claim to have abated 1.2 million to 1.5 million tonnes of CO2 through energy conservation, renewable energy from solar and wind, and 500 vehicles powered by electricity or hydrogen that contribute to the zero emissions area in the Olympic Park and Athletes’ Village.

The lessons from Beijing will be valuable for London 2012, this friendly, hospitable and safe place can teach us a lot.