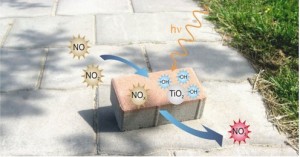 The only headlines the Dutch town of Twente has made recently have been around employing former England football manager and ‘wally with a brolly’, Steve MacLaren and the team’s upcoming European Champions League match against Arsenal.

But while Twente’s citizens gear up to give the Gunners a pasting, its scientists have been spending their time away from the football and in the lab. The end result? Paving stones that soak up and purify airborne nasties.

The University of Twente, alongside the municipality of Hengelo, has come up with said stones, capable of sucking in the nitrogen oxides which exit the common or garden car, and turn them into “harmless nitrates”.

Here’s how it all works, courtesy of the Dutch boffins:

The top layer of the paving stones is made of air-purifying concrete. This concrete contains titanium dioxide, a photocatalytic material which uses sunlight to convert the nitrogen oxides in the air into harmless nitrates. The rain then washes the streets clean.

Based on a Japanese invention, the stones were further developed and their effectiveness demonstrated by the UT in its concrete research laboratory. The next step now is to test the stones in practice. The municipality of Hengelo has made the Castorweg location available for this purpose. The street will be divided into two sections, one half will be paved with conventional stones and the other half with air-purifying ones. The air quality will then be measured in each section to test the effectiveness of the stones. As an added bonus, the stones repel dirt and therefore always stay clean.

How cool is that? Cleaner air and no chewing gum or dog poo.

The stones will feature in the Hengelo road from the end of this year, with the scientists measuring their effects from early next year. Summer 2009 will see the first results from the test. Watch this space.