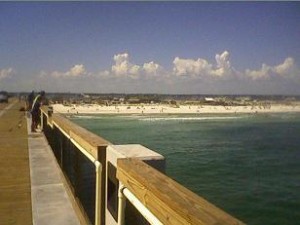 If it still feels like a recession in many places, no matter what the economists say about recovery, along the Gulf Coast these days, the situation feels more like a depression.

Up to 60,000 barrels of oil per day continue spewing into the Gulf from BP’s broken Macondo well, and — despite all the dispersants, booms and controlled burns — the crude keeps making its way onto shorelines and coastal areas. The disaster’s timing has proved especially brutal, coming as it has at the height of tourist season, shrimping season and shorebird/sea turtle nesting season.

Just a few short months ago, this was still a region where you’d hear a lot of calls for “drill, baby, drill.” You don’t hear that much these days. In fact, since the April 20 explosion of the Deepwater Horizon drilling rig, the area has given birth to a diverse population of grassroots movements and organisations calling for an end to oil and a push for clean energy.

This past weekend, a group opposed to offshore oil drilling — Hands Across the Sand — succeeded in drawing out thousands of people for quiet demonstrations on beaches across the US and internationally. Launched in Florida, Hands Across the Sand ironically was founded months before the BP disaster started, when state legislators were considering lifting bans on drilling in Florida waters (that proposal was tabled).

“No one industry should be able to place entire coastal economies and marine environments at risk with dangerous, dirty mistakes,” said Dave Rauschkolb, the group’s founder.

Another new organisation, Clean the Gulf Now, has the goal of ending BP’s use of Corexit, an oil dispersant that’s failed to win environmental approval from authorities in other countries like the UK. Instead, the group advocates the use of bioremediation strategies to minimise the impact of the oil disaster.

For a region long dominated by calls to let the free market rule and keep government hands off, the public discourse has taken a dramatic turn in the past couple of months. People here are increasingly looking at the sunshine — Florida, after all, is the Sunshine State — and wondering why more solar power hasn’t been developed. They’re looking toward the Gulf and saying they’d rather see wind turbines than tarballs. It’s a sea change, really … in more than one sense of the phrase.