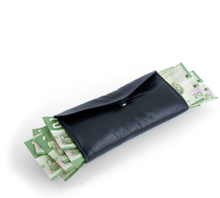 Defra has gone news mental these days. Every time Greenbang turns around it’s making another announcement, enabling the trotting out of some lazy Mr Benn puns (Greenbang tips her hat to the Defra media folk for always referring to the venerable Hilary as Mr Benn). So what have the government scamps been up to after the carbon offset kitemark system? Getting out their great, big, fat, leathery government wallet and depositing a healthy £400 million at the feet of the clean tech makers.

Here’s the facts from the mouths of the Defra boys themselves:

As part of the domestic Environmental Transformation Fund (ETF), the Carbon Trust will receive £47.4 million to bring forward new energy technologies such as offshore wind, third-generation photovoltaic power, marine energy and biomass heating. This funding will also be used to increase the Carbon Trust’s energy-saving loans scheme for small and medium sized enterprises by a further £12 million to £62 million since 2003.
In addition, over the next three years the government will also provide around £10 million for a new anaerobic digestion demonstration programme. Up to four commercial-scale facilities will show the potential of this technology to create renewable energy, reduce greenhouse gas emissions and avoid waste being sent to landfill.
The 1.4% real increase in Defra’s overall budget on 2007/08 shows the government’s commitment to the environment with significant new investment in the following areas:
• low-carbon technology – domestic ETF fund increased to £400 million plus £800 million to tackle environmental challenges in developing countries over the next three years;
• sustainable waste infrastructure – over £2 billion Private Finance Initiative credits provided over the next three years;
• flood protection – spending £2.15 billion over the next three years; and
• Rural Development Programme for England – resources doubled to £3.9bn available to 2013.
As part of the 2008/09 budget settlement:
• Natural England will receive £176 million to enhance biodiversity, landscapes and wildlife in rural, urban, coastal and marine areas;
• The Environment Agency will receive £796 million to protect and improve the environment in England and Wales;
• Animal Health will receive £128.1 million to combat disease and ensure animals are healthy; and
• The Rural Payments Agency will receive £255.8 million to effectively administer the Single Payment Scheme payments.