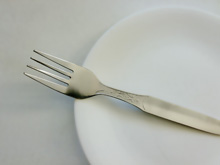 Apparently the large-foreheaded one has warned assorted farming types that the times they are a changing. Here’s a snapshot of his speech:

changes are happening in our world…changes like global economic progress and what this means for peoples’ diets, climate change and the move to biofuels which directly affect the ability of the world’s farmers to fulfil their essential purpose: to grow enough food for us all.

We face the potential prospect that the abundance of food that we all take for granted will come to a crashing end.

And so, it is argued we should now completely re-examine all our assumptions about how food is produced in our country.

It’s all a bit like World War II isn’t it, don’t you think? Cameron does.

We have, of course, been here before.
During World War II, there were shortages of aeroplanes and guns and bullets.
But the most important shortage of all was of something even more fundamental – food.
Rationing brought home to everyone the simple fact that we had barely enough food to live on.

They’re not a panacea because unless they are truly sustainable, the may well harm the environment more than protect it.

That’s why the Conservatives voted against the Renewable Transport Fuel Obligation.

And biofuels are not a panacea because the more land we use to make biofuels, the less land we have to produce the most valuable fuel of all: food.

The figures are stark. According to The Economist, last year, a third of America’s maize harvest was turned into ethanol to fuel cars.

That affects food markets directly – you could feed a person for a whole year from the grain that produces just one tank of fuel for a sports utility vehicle.

And indirectly too – as farmers, cashing in on biofuels, change to maize at the expense of other crops like wheat. These three factors – diet change, climate change, crop change – are contributing right now to global food crunch.

Grain stocks are at their lowest level for thirty years with food prices actually rising by six percent in the UK last year. And these factors will continue to make that global food crunch worse in the years to come.